With our move to the Berkshires the second floor of our Cape Cod is entirely devoted to toys: Jan's sewing room and my train room.  I have been a Railfan all my life and have always been interested in model railroads and now we finally have a space where I can pursue my interest.

I am what is known in the biz as a "high railer", using O gauge Lionel-style track and scale or near-scale rolling stock in a semi-realistic scenic setting. Rather than a layout with concentric loops of track with several trains madly screaming about my track plan and operating scheme mimics an actual railroad, with the purpose being to transport goods.

O scale is ¼" to the foot or 1/48 scale so it takes up a lot of space. Most modelers use HO scale which is 1/87 proportion but that stuff is too small for my Senior eyes so O scale it is. What this means is that in a 13'X14' room the track plan is necessarily quite simple: a loop around the perimeter of the room with sidings for several industries. An interchange track (a connection with the outside railroad world) is through a tunnel into a corner of Jan's sewing room. The operating scheme is the delivery of loads and empties to the on-layout industries with the pickup of loads and empties from those industries being delivered back to Interchange where they are picked up by virtual trains to be delivered into the virtual outside world. This is the essence of any model railroad operating scheme.

It has been said that a picture is worth a thousand words so here are some pics :~)

Don't forget that clicking twice on a pic enlarges it greatly.

A bit about construction: 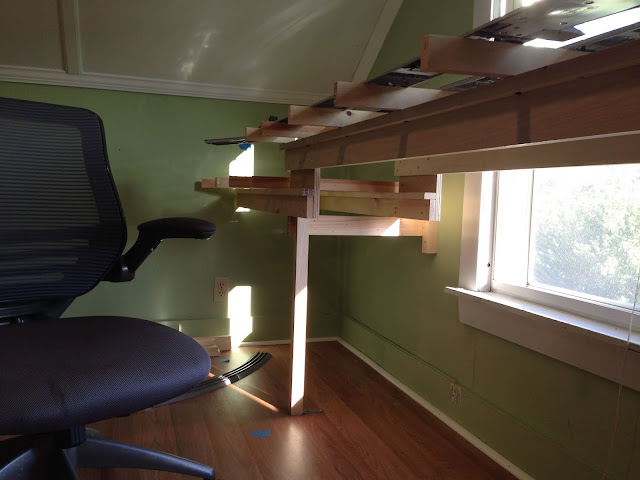 First is Benchwork. I used a tried&true
method: ¼" plywood decking resting on
1X2 joists which rest in turn on
beams made of screwed&glued
1X3 with 1X2 flanges. Strong, lightweight
and easy to modify. 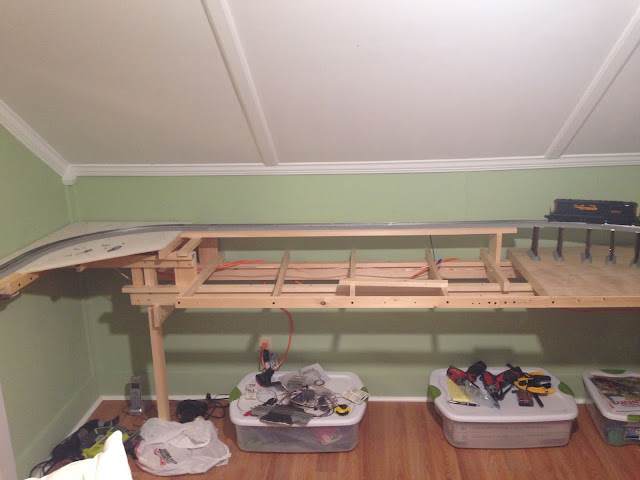 These unrealistically sharp toy-train
90deg corner curves were hidden by
mountains.
That was the first day of operations. 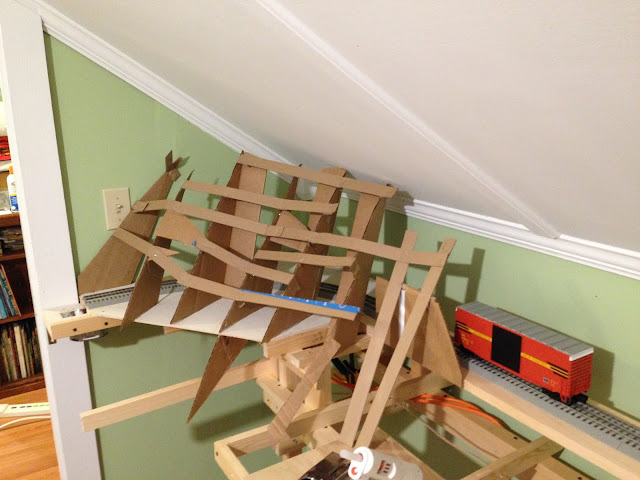 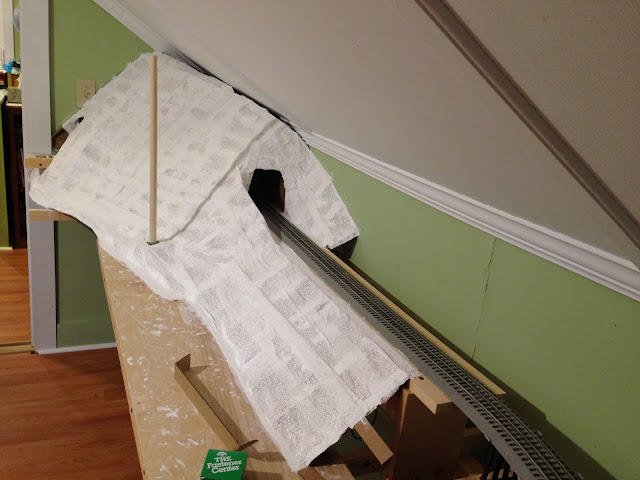 Covered with plaster cloth
(the stuff Docs use to make casts) 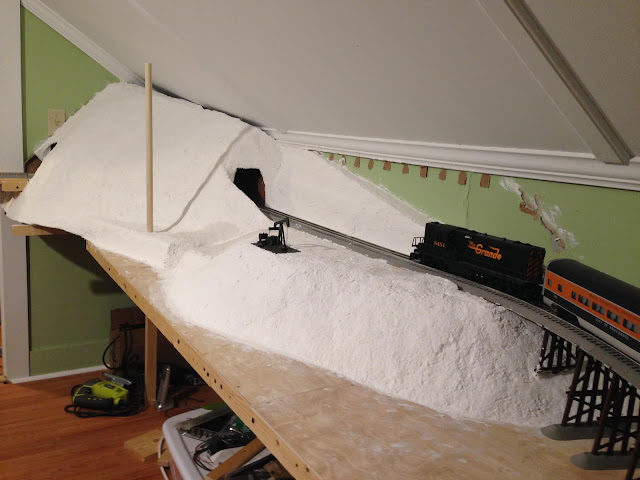 covered in turn with a modeling product
called "Sculptamold".

As it all looks today: 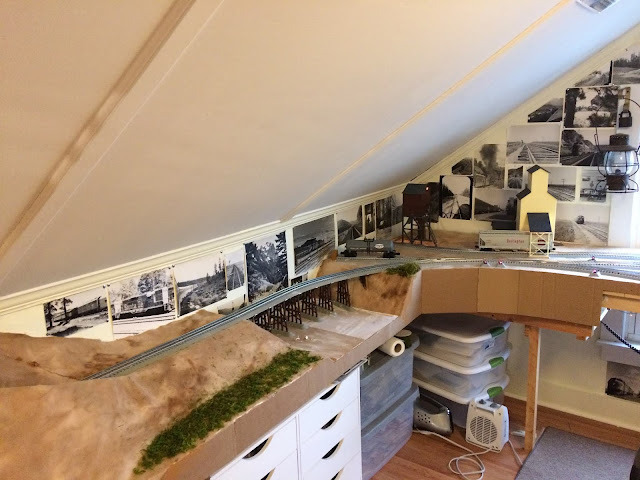 The pic third from extreme left is of the Grand Canyon train.
I once rode in the locomotive from GC to
Williams Junction and return. The pic second from left is
of a Santa Fe GP9, the engine I rode.

There was a.22 rifle above the Fireman-side
front-facing door. I learned what it was for when
a bull walked onto the track and the engineer had to bring
us nearly to a stop (open range so cattle everywhere). Blowing the whistle did no good. The fireman took down the gun, opened the
door in front of him and shot that bull several times.
The bull then ambled off the track, unhurt because
the ammo was, of course, birdshot and all it did was sting him. That particular bull
loved to bother the train. 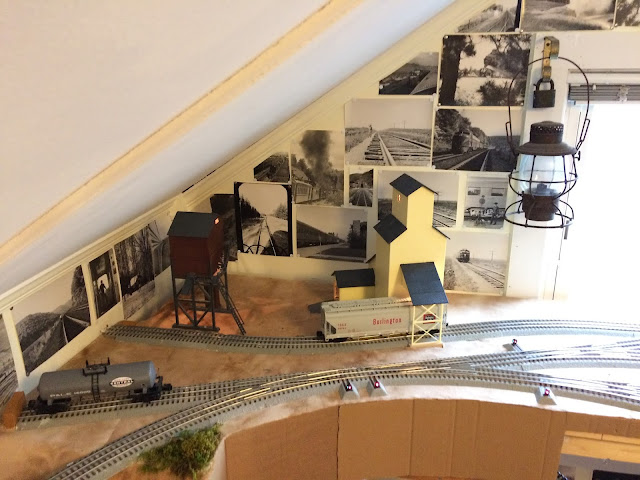 Grain elevator, Tipple and
[virtual] tank car unloading
facility. For years a tank car
was periodically delivered to
a team track siding in Somerset, Pa
where it's cargo would be offloaded
into tank trucks. I need an O
scale tank truck to complete
the scene. 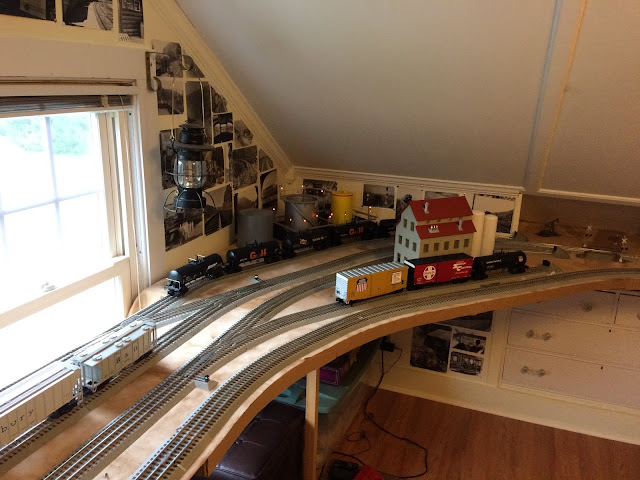 Oil refinery and paint factory.
The refinery produces loads of
petroleum products. Loads of
solvents, resins and pigments
come in to the paint factory and
loads of paint leave in boxcars. 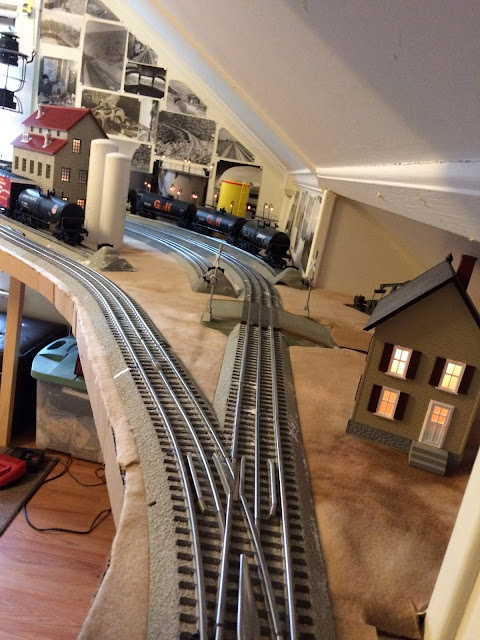 Track is Lionel Fastrack.
Scale size ties and tie spacing
with built-in "ballast".
Hard to not see that
unrealistic third rail
(the purpose of which is to
bring electric power to
the train, as a trolly-wire
would do) but that is what third-railers
do. 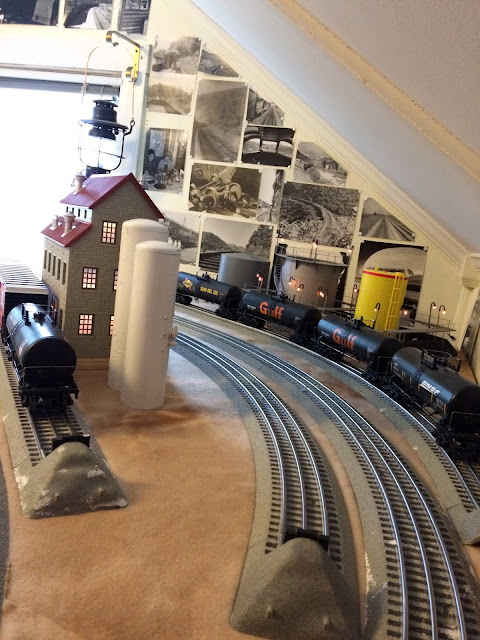 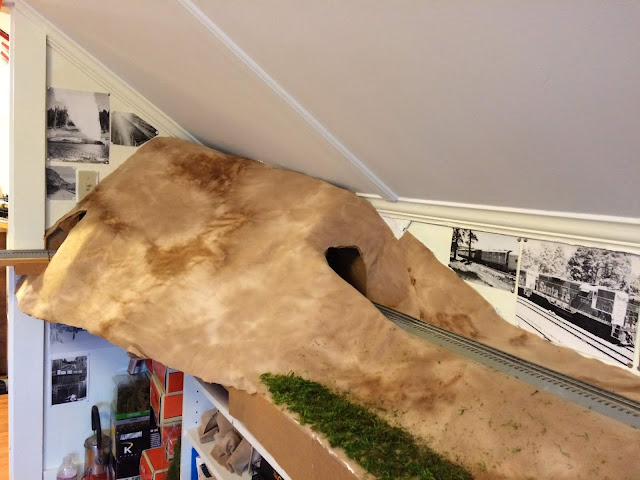 Ground cover is fleece
from Joanne :~) 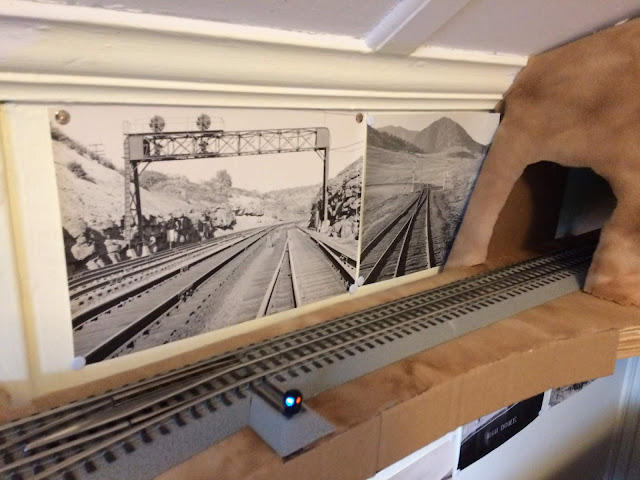 The left pic is near Bennington Curve
close to the top of the Hill above
Horseshoe Curve.
The right pic is starting the climb
to Moffat Tunnel
West of Denver . 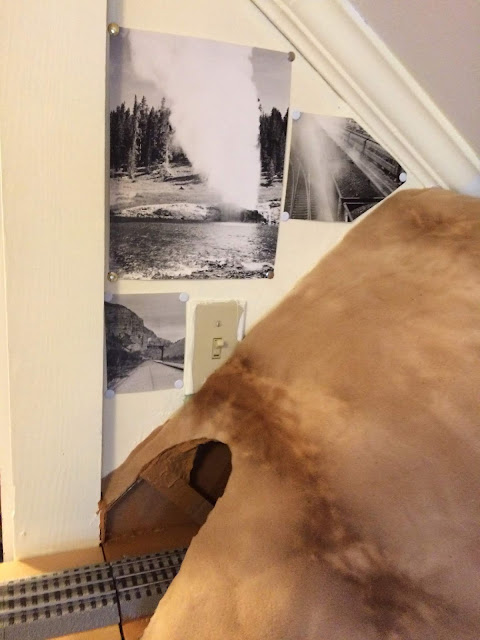 Riverside Geyser in the pic.
To the left a Pennsy freight after descending
the Hill to Altoona. Wreathed in brake smoke.


Now about those photos wallpapering the walls. Scenery on this pike is simple and largely symbolic/schematic and the photos are an important scenic element. They were taken over my childhood by my Dad and processed in his darkroom. Many of them I developed as I often helped in the darkroom. 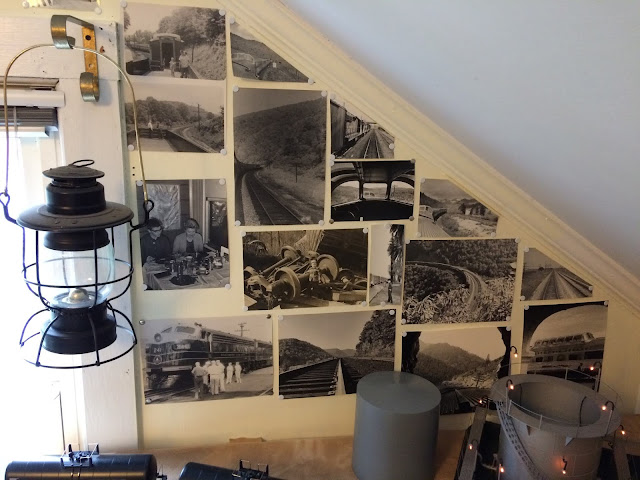 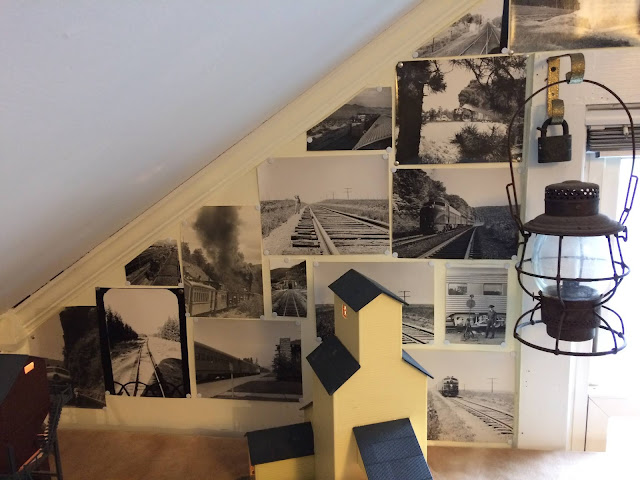 Bottom left is passing through
Island Park, Id a few miles from
West Yellowstone. 1960, the
last year the UP Park Special
ran to West. The other pic is of
the train standing in front of the dining
hall in West. We all got off the train
and walked in where breakfast was
laid out. The Conductor had come
through the train and taken our orders
earlier.
The railroad lantern belonged to either
my Grandad or his brother. They were both
Telegraphers on the PRR. 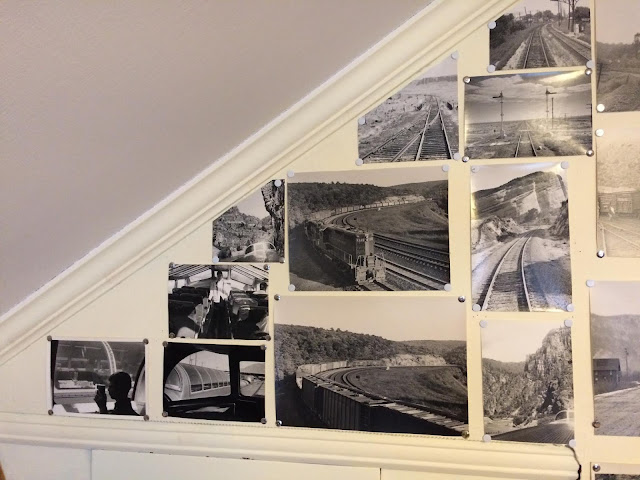 Center is a train climbing the Hill
above Horseshoe Curve. Pic to the right is in Cajon Pass
on the Santa Fe.
Bottom left is me filming a passing
UP Dome from another UP Dome. 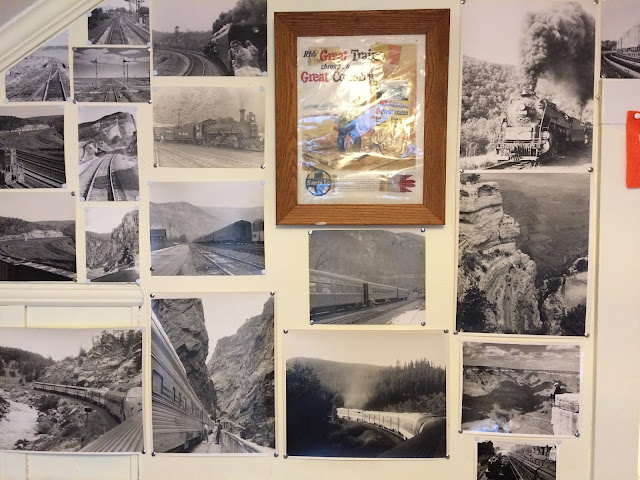 Top right is the 2100 and 2124 doubleheading
on a Reading Ramble c. 1959.
Left center is a D&RGW Narrow Gauge
train 1954.Bottom left is the California Zephyr
along the Colorado River near it's headwaters.
Next is the D&RGW Royal Gorge....
in Royal Gorge. A 10min photo stop.
Next rightward is the Royal Gorge
somewhere near Tennessee Pass,
which until mothballing was the highest
mainline railroad pass in America.
Bottom right is me dangling my feet
over the rim of the Grand Canyon.
The PRR passenger train is stopped in Driftwood, Pa c.1955.
Top just left of center is a B&O excursion train
pulled by an EM1, their heaviest articulated
freight engine. Pic taken from an open gondola car c 1956.
You can see one person's goggles, a necessity
to keep coal fly ash out of one's eyes. 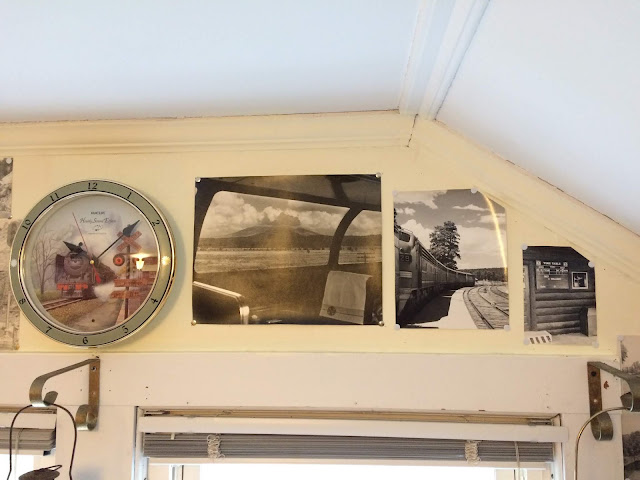 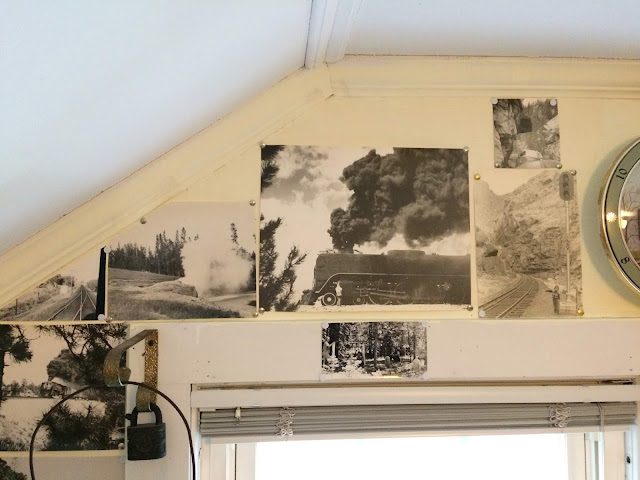 Center is the UP 844,
a super-power 4-8-4 Mountain
class engine on a photo-run-by.
National Railway Historical Society
convention excursion train
on Sherman Hill
(West of Cheyenne, Wy)
1963
To the right, 4y old me holding a miniature
lantern in Royal Gorge.
Left is Riverside Geyser.
Bottom center (small pic)
is us at the graves of
Stot, Scott and Wilson,
lynched in the Pleasant Valley
range war. Probably hung from
the trees in the background. 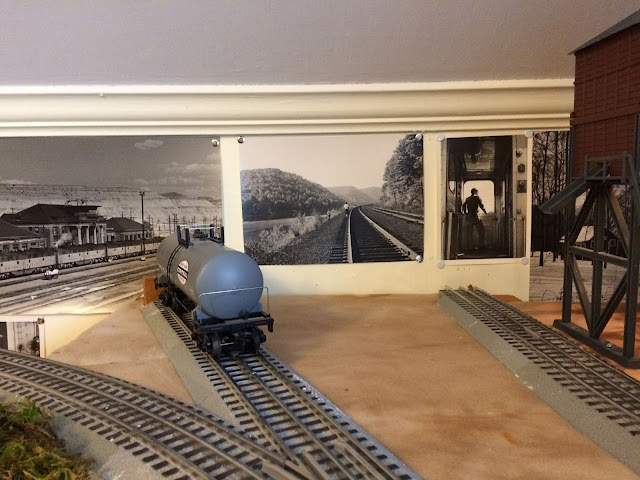 To the left of the tank car, Green River, Wy
with brace of E9s in front of the station, c. 1964
Immediate right taken on the PRR across the
Allegheny River from the Woods.
Further right me looking out an open
vestibule door (top half of the door open).
My favorite way to ride a train.

Your comments are welcomed. Please consider using our links for internet purchases. We earn a commission!